BITCOIN ROUT – What’s it All About? A Dose of Sanity with The Crypto Lark

After a period of range-bound stability from August to November, Bitcoin unexpectedly slid from the mid-$6,000s to below $4,000 within a matter of days. Markets are known for washing out investors just when they think they’ve found a bottom – but this felt especially sudden, like a trap door opening. What exactly is going on here?

In search of a levelheaded perspective amid the mayhem, Crush the Street interviewed New Zealand’s most popular crypto personality, Lark Davis, a.k.a. The Crypto Lark. Mr. Davis has a popular YouTube channel, also called The Crypto Lark, with over 83,000 subscribers.

A cryptocurrency enthusiast who posts videos regularly exploring the satirical side of the news and fact filled-reviews and interviews, Lark Davis’ personality is infectious and unforgettable. Known for his articulate, entertaining style, Lark combines his political science background, critical thinking skills and bright sense of humor to produce content that explores blockchain solutions to the corrupted world.

Always forging his own path, Lark Davis grew up on a small organic homestead, reading Mad magazine, dreaming of space travel and pretending to be Indiana Jones. As a seasoned world traveler, Lark has seen the results of excessive wealth and poverty and is currently working on several side projects, including dairy-free cheeses and a banana farm. 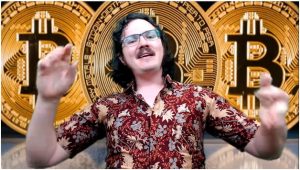 With the mainstream media providing nothing but shouting and hyperbole, we knew that Mr. Davis could inject some sense into the reeling crypto community. During our fascinating conversation, Crush the Street asked Lark if he could explain exactly what’s going on with the recent drop in the price of Bitcoin.

According to Lark Davis, markets always have a way of surprising investors: as soon as you think you know what they’re going to do, they tend to do the opposite. It works in an utterly counterintuitive manner: if everybody thinks that something is going to happen, it’s probably not.

And that’s certainly the case with Bitcoin and other cryptocurrencies, but that hasn’t disheartened Mr. Davis. In fact, according to Lark Davis, he’s viewing the recent price action as something to be excited about: it’s an opportunity to dollar-cost average into one’s favorite cryptos and to get in at a great price.

For investors who bought Bitcoin and other cryptocurrencies at the wrong time, Lark understands the emotions you might be feeling right now. However, according to The Crypto Lark, he’s looking for $3,000 to be the bottom for BTC, and he’s still incredibly bullish on Bitcoin long-term. 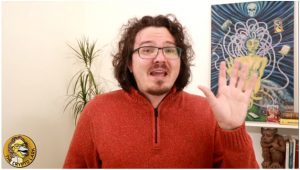 Regarding the idea of buying Bitcoin when there’s “blood on the streets” (to quote Warren Buffett), it’s certainly psychologically difficult to do that when everyone’s telling you not to, according to The Crypto Lark. But Mr. Davis reminds us that we’ve seen Bitcoin undergo more than five 75%-or-greater corrections, and the naysayers always come out and declare the death of Bitcoin during those times.

Thankfully, Bitcoin is still here and the crypto industry keeps coming back, every single time. And according to Lark Davis, there are big-money players getting into cryptocurrencies at these depressed prices – and they’re not getting in to just play around, as these are major players using huge amounts of capital.

As for the future, according to The Crypto Lark, he’s looking down the road and seeing this becoming a multi-trillion-dollar industry. With the expansion of blockchain platforms across the developing world, and with more countries discovering and adopting crypto and blockchain technologies, the potential is there for the industry to grow exponentially.

The Crypto Lark’s conversation with Crush the Street is replete with sharp analysis and plenty of surprises, so don’t miss the complete interview. You should also check out The Crypto Lark on YouTube for frequent video updates on everything related to cryptocurrencies and the blockchain.

Additionally, you’re invited to get immediate access to Crush the Street’s latest wealth-building strategies by downloading our report on the untold digital fortunes now available in cryptocurrencies and the blockchain, our top three steps you can take to protect yourself from the death of the U.S. dollar, along with our exclusive report on the massive profits flowing into the artificial intelligence sector right now.