Who in the World Will Go Bankrupt Next?

About a week ago Congress introduced the “One Social Security Act” HR 3150 to combine the nearly insolvent Disability Insurance trust fund with the Old Age Survivor’s insurance which had enough funds to last to 2034.

With $142 Billion going to disability per year and over $700 Billion to old age survivors…this would worsen the total insolvency crisis for all social security to about 2028, 6 years closer than previous. Medicare and Social Security account for about 40 percent of all federal spending and are only projected to increase. Interest rate hikes will only worsen the situation, so far they’ve been at zero for over 24 hundred days.

Puerto Rico is possibly in official default as they’re missing a 58 million dollar debt payment. Treasury Secretary Jacob Lew has said there is no discussion of a federal bailout. Their total debt load is 72 billion.

In Greece, Prime Minister Tsipras has called for a partywide vote sunday to ask if Greece is better off without help from European rescue loans. Rumors about a secret plan to leave the Euro he denied Friday. Details of the 86 Billion Euro bailout are being discussed in Athens. The IMF is calling for debt relief to be part of the bailout plan. heir stock exchange to reopen Monday after being shutdown over a month since June 29th.

In commodities, the oil price is down another $2 for WTI and $3 for Brent Crude. This is despite the US Dollar Index hovering around 97 and even dipping. Oil-Price.net’s prediction for oil in 1 year is $54. This would mean continued lower demand worldwide. Thought alternative energies are picking up, it should not be fast enough to keep oil down; these could be global depression levels. With a mild recovery, we should see around $70 oil in a year.

The Baltic Dry Index, a long-time indicator of the global economy, after collapsing to below 2008 crash levels, has recovered to an 8-month high over 11 hundred, most likely because of the Iran Nuclear deal passing, lifting some sanctions on the country who has power over the Strait of Hormuz where about 35% of petroleum over sea passes through.

Gold further slumped under eleven hundred, down over 6% in a month as well as Silver modulating under 15 dollars per ounce in the last week.

A report by SRS Rocco shows the cost in diesel fuel to mine an ounce of gold at 100 times that for an ounce of silver. He states that peak gold production will occur first, but not long before peak silver production. The article also mentions US Shale oil production peaking and now declining. Silver production will peak shortly after because 70% of global silver mine supply comes as a by-product of base metal and gold mining.

Interestingly, Provident Metals shows silver in stock, though APMEX still shows delays, but premiums have dropped back down. The US Mint has resumed sales of American Silver Eagles as well. Gold however is now showing shortages as GoldSeek reports Perth Mint cannot meet demand; the treasurer of the Mint says there’s a surge in demand for kilo bars, particularly in Asia: India, China and now Thailand; saying “everything we get in is going straight out the door as soon as we refine it.” The US Mint has seen the highest sales of gold coins in over 2 years.

Bitcoin is showing strength around the 280 price. In our opinion, it is a coin spring ready to snap up, potentially to $500 a bitcoin by year’s end. With the volatility bitcoin has had in the past, this would not be too unusual. It frequently has fast rallies and drawn out bear markets. Remember just one month ago it was at 255; it’s already up about 10%. A steady rise at this rate would put us over $400 by December, but steady rises are not in bitcoin’s cards; maybe not until enough liquidity is had with stock market integration and mass adoption.

Remember Jade Helm? After officially starting July 15th, no major news has jumped out from the operation. It does take a secret operation however to accelerate the police state; in Berkeley California police conducted a full-scale military operation to search for one robbery suspect who was not even confirmed armed. The photos show the search appearing not unlike the Boston Bombing suspect search just a few years ago. American neighborhoods should not look like war-zones.

Who in the World Will Go Bankrupt Next 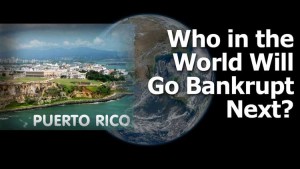 About a week ago Congress introduced the “One Social Security Act” HR 3150 to combine the nearly insolvent Disability Insurance trust fund with the Old Age Survivor’s insurance which had enough funds to last to 2034.