SOLID GOLD: Getting Beyond the Fake News, Manipulation Memes, and Price Derangement Syndrome

Investing is rife with choices, and unfortunately retail traders tend to make poor choices when markets beset them with head-fakes and misinformation. In the case of gold, American investors in particular have fallen prey to Price Derangement Syndrome as market forces continue to push the price above and below $1,300. 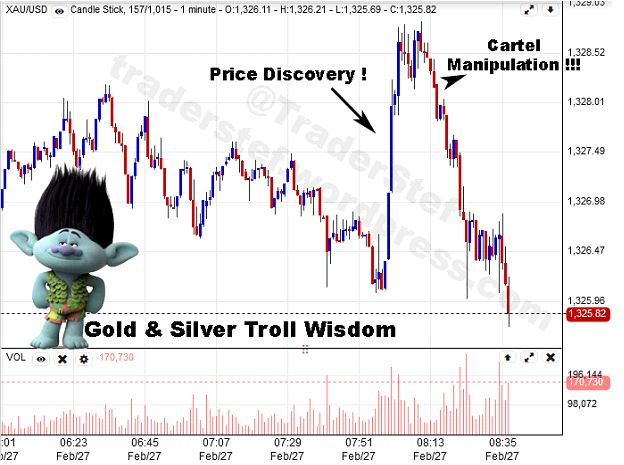 As individual investors, we can choose to complain about manipulation – a legitimate concern, no doubt. Beyond complaining, though is a more effective solution, which is self-education, and there are actionable steps you can take that would benefit you as a trader as well as the investing community as a whole.

First and foremost, you can focus on realistic and reasonable analysis for profit and capital preservation based on market conditions and price action. While most retail traders get shaken out by short-term price fluctuations, you can instead choose to ignore the noise and focus on low-risk entries by accumulating gradually when gold prices are attractive.

Next, you can make a difference by supporting legislation at the federal and state levels through organizations like the Sound Money Defense League, whose objective is to return gold to its rightful place as nontaxable constitutional sound money; this alone would greatly contribute to a fair value price discovery for gold.

And most importantly, you can educate yourself and others on what’s real and what’s fake in gold market reporting. Most folks are too busy with everyday life to conduct due diligence by looking at charts and fundamental data, and instead rely upon an intermittent flow of mainstream financial headlines. Simply by keeping your eyes open and filtering out the FUD (fear, uncertainty, and doubt), you’ll have a considerable edge over the hapless multitudes who lose money in the markets year after year.

While governments, central banks, and the corporate media blare their trumpets for stock-market indexes, they fail to mention that a simple “hold gold” strategy has handily outperformed the S&P 500 since the turn of the century: 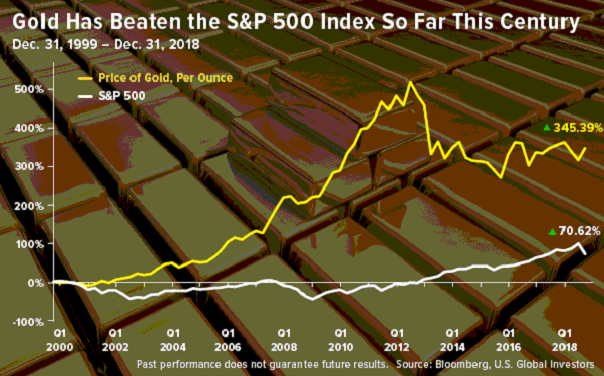 Double-checking that chart with gold’s over-the-counter (OTC) 24/7 spot price versus the S&P 500 yields similar results and the same conclusion:

… and when comparing gold’s performance to U.S. bonds, oil, and the dollar since 2000, gold has outperformed all of them: 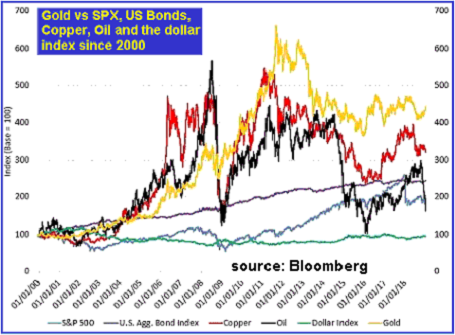 Even in the short-term, the idea that gold is underperforming is fake news, or at least a gross misrepresentation: gold has, in fact, made all-time highs in at least 72 currencies across the globe this year.

Another point of confusion is that a gold ETF like the GLD SPDR Gold Shares actually has the power to manipulate spot gold prices. This misconception puts the cart before the horse, as GLD tracks OTC spot gold, not the other way around. Think about it: GLD and other American ETF’s only trade 5 days a week and only during the daytime, while physical gold, gold futures, and OTC spot are traded around the clock and around the world.

GLD’s price and mechanism behind its price discovery do not determine the price of gold, nor do the fluctuations of physical gold held by the fund determine the market price of gold itself. The price-setting mechanism is the spot gold price: to see this in action, if you have access to real-time charts then you can witness the price action of spot gold precede the price movements of GLD.

In short, the GLD ETF is merely a derivative and lagging indicator – and frankly, they’re not the crisis hedge that you’ll get by owning the real deal: physical gold stored in a secure location and properly insured. With this, you can sleep comfortably at night knowing that your assets will hold up well against fiat currency when the global economy contracts – which could happen sooner rather than later in this old, weary equities bull market. Even if a hyperinflation event forced our equity markets higher, gold will outperform and maintain its purchasing power versus fiat currency.

Additionally, I highly recommend learning to interpret price charts in addition to paying attention to the fundamentals of the economy and markets. The charts are based on math, not emotions, and they can tell you what’s really going on when the mainstream press is infatuated with fake news and false alarms.

Most retail traders over-focus on short-term price movements, but by pulling back and looking at longer time frame charts, they provide us with a more mature and logical perspective. On the monthly candlestick chart for gold, we can discern an Ascending Triangle forming – this is a typically a bullish formation that occurs during an uptrend as part of an accumulation phase: 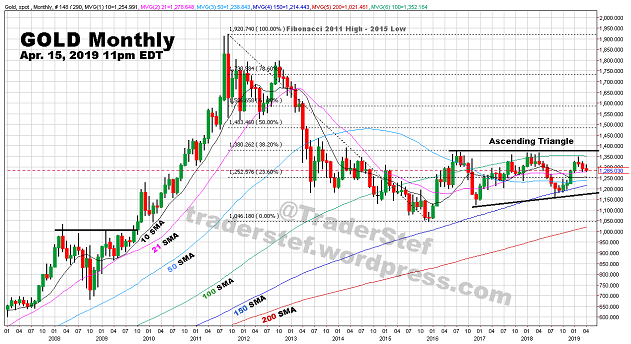 The Ascending Triangle is like a slingshot being pulled back: the price range gets tighter and tighter, the tension builds, and the support line gets higher and higher. Once the price breaks decisively above the upper horizontal resistance line, the slingshot is released and the price is free to ascend.

For traders looking at the near term, I would say that a neutral, wait-and-see position due to spring seasonality patterns could be the best policy until the overhead 100 Simple Moving Average (SMA green line) on the monthly at around $1,350 is taken out with conviction, which could then initiate a shift to a more bullish outlook.

The price action could be choppy before challenging $1,380 resistance the topside Fibonacci level of the Ascending Triangle – and in the short-term expect gold to shift on a dime based on news headlines and financial market events. But again, I’m thinking long-term and am willing to wait patiently for a big breakout, which has been years in the making and, I believe, will be breathtaking when it does happen.

Besides, with over 5,000 years of history as a terrific store of monetary value, gold remains as solid as ever in a shaky global economy. Trust me when I tell you that they’ll throw everything they can at you: fake news, scare tactics, and the ever-present Price Derangement Syndrome – no worries, though, as you don’t have to let the haters and manipulators take the shine out of your time-tested, rock-solid portfolio strategy.

Get updates on gold and
more Wealth Building Ideas for the new economy.