Jamie Dimon Rips into Cryptos Again! What is REALLY Going On?

It looks like the cryptocurrency bashing has resumed, at least among some of the Wall Street elites. In Bloomberg article it was recently reported that JPMorgan CEO Jamie Dimon repeated some harsh comments that he had made last year on Bitcoin, saying that cryptocurrencies a “scam” and claiming that he had “no interest” in Bitcoin. Then Dimon suggested that governments might move to shut down cryptocurrencies because of their inability to control them.

What is going on with this repeated crypto bashing? For some perspective on this, Crush the Street turned to Chris Langlois, who cofounded a highly respected firm as a way to capitalize on the evolution of finance by developing security tokens as digital securities. Focused on the democratization and evolution of finance through smart contracts and blockchain technology, Chris is passionate about his work and is a renowned leader in cryptocurrency and finance.

In a fascinating interview with Mr. Langlois, he was asked about his thoughts on this situation and whether there is any merit to Jamie Dimon’s scathing comments about Bitcoin and cryptocurrencies in general. According to Chris Langlois, there are always going to be ups and downs with Bitcoin, and Bitcoin has certainly been a pioneer and set the stage for the crypto market. He stated that Bitcoin is a great way to store value and is a great way to exchange a form of currency in a different medium. Chris continued by asserting that Bitcoin is not a scam and that the cryptocurrency world is the future.

As we can see in the following graph, the growth of ICOs in 2017 may have been a case of “too much, too fast”: 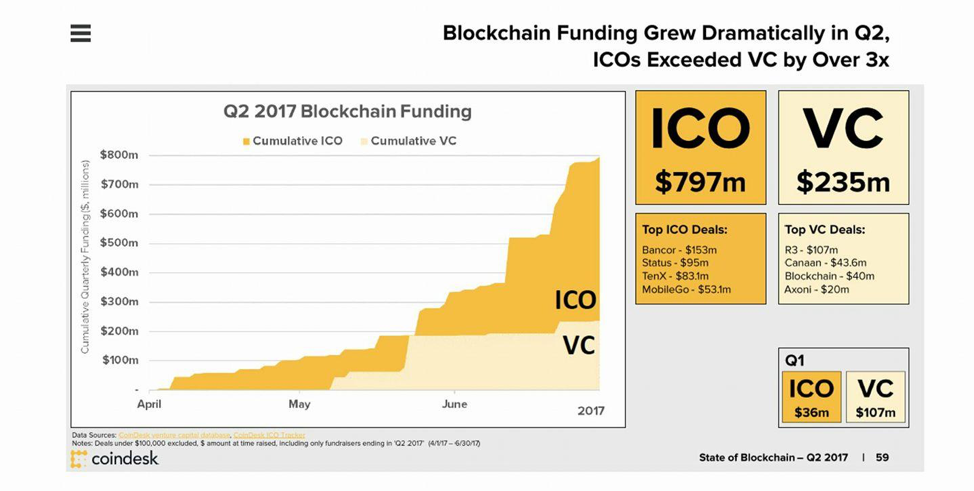 It’s incredible to think that ICO growth had dwarfed venture capital growth during that period. There was a rash of new ICO funding, not all of it justified and well thought out. Exponential growth without strong oversight led to an ICO explosion, both in the number of ICOs and in the amount of capital flowing into the ICO space:

Chris Langlois explained the ICO situation in the interview, stating that in 2017 many of these ICOs raised a lot of capital really quickly, and he started to notice red flags in some of these ICOs: they lacked management, the investments weren’t secure, they were high-risk, and in many cases, there really wasn’t a minimal viable product.

Still, according to Chris Langlois, while there may have been some scams within the ICO market, he doesn’t believe in calling Bitcoin a scam. In regard to the future of cryptocurrencies, Mr. Langlois said that we’re moving through the Crypto 2.0 phase, in which we’re moving away from some of the ICOs with poor architecture. He stated that he saw a statistic that 56% of all ICOs have failed, and another statistic that only a handful of ICOs have sold on a secondary market at a price higher than what their pre-ICO was.

Certainly, the cryptocurrency market is changing and evolving. As Chris Langlois has said, we need to embrace some of the regulations in security token offerings. The Crush the Street experts concur, and we are looking forward to a better a more secure crypto marketplace in the future.

Crush the Street agrees with Chris Langlois that the world of cryptocurrencies is changing, and we’re committed to keeping you updated on the latest trends and developments in the crypto sphere. Check back frequently for our upcoming picks in September and October, which will focus on cryptos and the blockchain.

This work is based on public filings, current events, interviews, corporate press releases, and what we’ve learned as financial journalists. It may contain errors, and you shouldn’t make any investment decision based solely on what you read here. It’s your money and your responsibility. The information herein is not intended to be personal legal or investment advice and may not be appropriate or applicable for all readers. If personal advice is needed, the services of a qualified legal, investment, or tax professional should be sought.  Never base any decision off of our emails.  Never base any decision off of our emails. Please use our site as a place to get ideas. Enjoy our videos and news analysis, but never make an investment decision off of anything we say. Please review our entire disclaimer at CrushTheStreet.com.