It’s been a tough year for NEM so far price-wise. Since its highs of $1.70 at the very beginning of 2018, NEM has declined sharply with the rest of the overall cryptocurrency market.

NEM is an innovative blockchain and one of the leading contenders to Ethereum. It uses Smart Assets, which allow it to build scalable applications.

The early quarter of a year is traditionally a turbulent period for the cryptocurrencies, and following the price explosion at the end of 2017, we now witness a natural price pullback across the board. 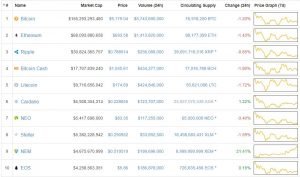 Although it remains to be seen if this trend can be maintained, in the last 24 hours, the price of a XEM token has increased by 20%, pushing its price back above $0.50 for the first time since early January. It is also worth noting that NEM is performing well in Bitcoin and not just against the U.S. dollar.

Since January 2017, NEM has produced some of the greatest gains in the market percentage-wise. Its price against Bitcoin has been impressive at times, although from September onwards, it lost ground before gaining on Bitcoin and fiat towards the end of 2017.

As Bitcoin struggles to push through $10,000, we see NEM continue to make ground against it. Many investors and traders speculate on altcoin price patterns to increase their holdings in Bitcoin. This is sometimes harder to achieve than many thought, as nearly all altcoins failed to perform against Bitcoin’s price breakouts.

What Caused XEM to Rally?

It’s common knowledge that cryptocurrencies do not require a reason to rally or dip in price, however, it is worth noting that there has been some good news emerging from the NEM community regarding adoption and real-world use cases.

NEM has invested $1 million into Digital2Go to integrate the company’s LocationCore platform into the NEM blockchain using Smart Asset features.

“The funds raised will be used to integrate D2GO’s LocationCore (TM) platform on the NEM
blockchain, making it the first location-based platform to utilize the technology.
LocationCoreTM is an existing product of D2GO that provides consumers’ mobile data and
anonymous location information to businesses for engagement and marketing purposes. A
number of businesses are already using the platform, including Incipio, AdParlor, Alamo Rental Car, and RCI (a division of Wyndham Resorts).

Another positive update for the NEM community is the updated version of NEM Library, a platform for building applications using the NEM protocol.

“NEM Library works everywhere, from back-end to mobile through front-end. So, just using NEM Library you can create one robust code base to build applications that use all the power of NEM Blockchain.”

NEM is also the only cryptocurrency used on the popular Chinese messaging app WeChat. News of this emerged late in 2017 and may also be one of the reasons behind the all-time highs seen in the early days of January 2018.

As we move further into 2018 and established tech-based businesses begin to implement blockchain applications, the space will eventually become less speculative. NEM has an amazing chance to disrupt many markets in Asia with its Smart Asset features and original codebase.

Disclaimer: There are no guarantees. Only invest what you are willing to lose, and please do extensive research on any cryptocurrency you choose to purchase.