Users found the site was down for unexpected maintenance before news of the arrest began circulating the online community. All hopes of the exchange returning have now been crushed, as the domain is now seized by authorities. 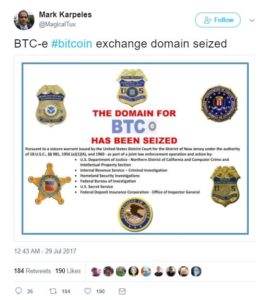 Although BTC-e is following the new trend of government-backed clampdowns in the online space, in recent weeks we’ve reported on the once largest dark market Alpha Bay being closed down, followed shortly by another dark market, HANSA.

$110 Million Fine and Links to the Mt. Gox Exchange?

The plot thickens with this incident, as investigations carried out reveal around $4 billion worth of Bitcoin flowed through BTC-e over its time in operation with alleged connections to the stolen funds from the Mt. Gox exchange hack.

An insightful blog post was posted by Kim Nilsson of WizSec (Wiz Security Consulting) revealing years of investigations into what really happened regarding Mt. Gox, Vinnik’s connection with the stolen funds, and the coincidental creation of BTC-e right after the Mt. Gox crash. With Vinnik now in custody, this information can be shared openly with the public.

If that wasn’t enough, a fine has been slapped onto the former exchange for $110 million for money laundering, a crime authorities do not take lightly. If Vinnik is found guilty, he faces up to twenty years behind bars.

What Happens to Innocent Users of BTC-e? Which Exchange is Next?

As always, the innocent seem to suffer hardest when incidents like this happen. The bitter reminder to not keep your valued cryptocurrencies on exchanges may seem like an obvious one, but it is always necessary to tell people, especially those that are new to the space.

A petition on Change.org for victims of BTC-e has commenced. It’s a noble effort, but the chances of customers being refunded may not ever happen, if at all. 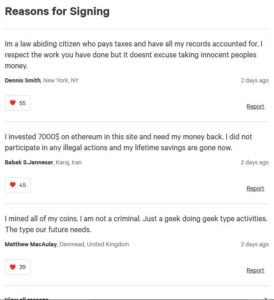 It is more important than ever to store your cryptocurrencies in a private wallet and not on an exchange. With governments worldwide beginning to take a zero tolerance stance on dark markets and exchanges, it opens the possibility of more exchanges potentially being seized in the near future – perhaps even the more popular ones. No exchange is truly safe, and usually the bigger they are, the more likely they are to receive the hardest punishments!

Could governments be trying to clean up this space before they truly embrace the power of blockchain technology and digital currencies?