“Doesn’t matter what analysts opine about with their market Bull vs Bear calls, it’s just noise. And, I don’t pay much attention to who they are, legend or not. Chart history speaks truth, not opinions. So here is the bottom line on Gold…

Gold’s Primary Bull (accumulation phase) began at the Aug 99′ low of $251. The current Secular Bull launched in Nov 04′ when the Feb 96′ $417 Lateral was taken out and held for several months. A Primary Bear began when in April 13′ the $1522 low on a Descending Triangle off the $1921 high broke down magnificently beginning in the European-Asian markets, and that Bear continued until the Dec 15′ low. We’re now back in a Primary Bull phase since the 13′ TrendLine was decisively breached in Feb 16′ without a violation, with a Megaphone pattern. When and IF the 11′ Trendline is decisively breached (currently at $1350’ish) and the $1921 High is taken out, Gold will re-assert its Secular Bull trend. 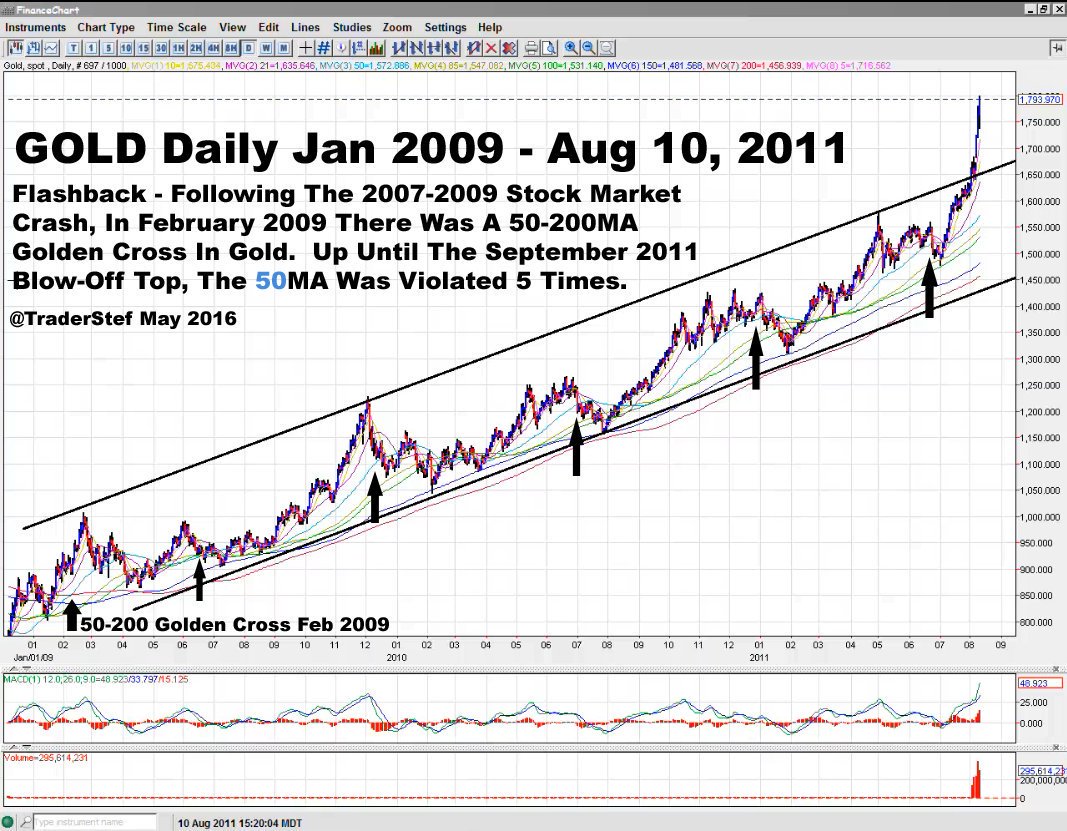 For the record, Gold has not yet seen a Golden Cross on the Weekly chart, but it has on the Daily. 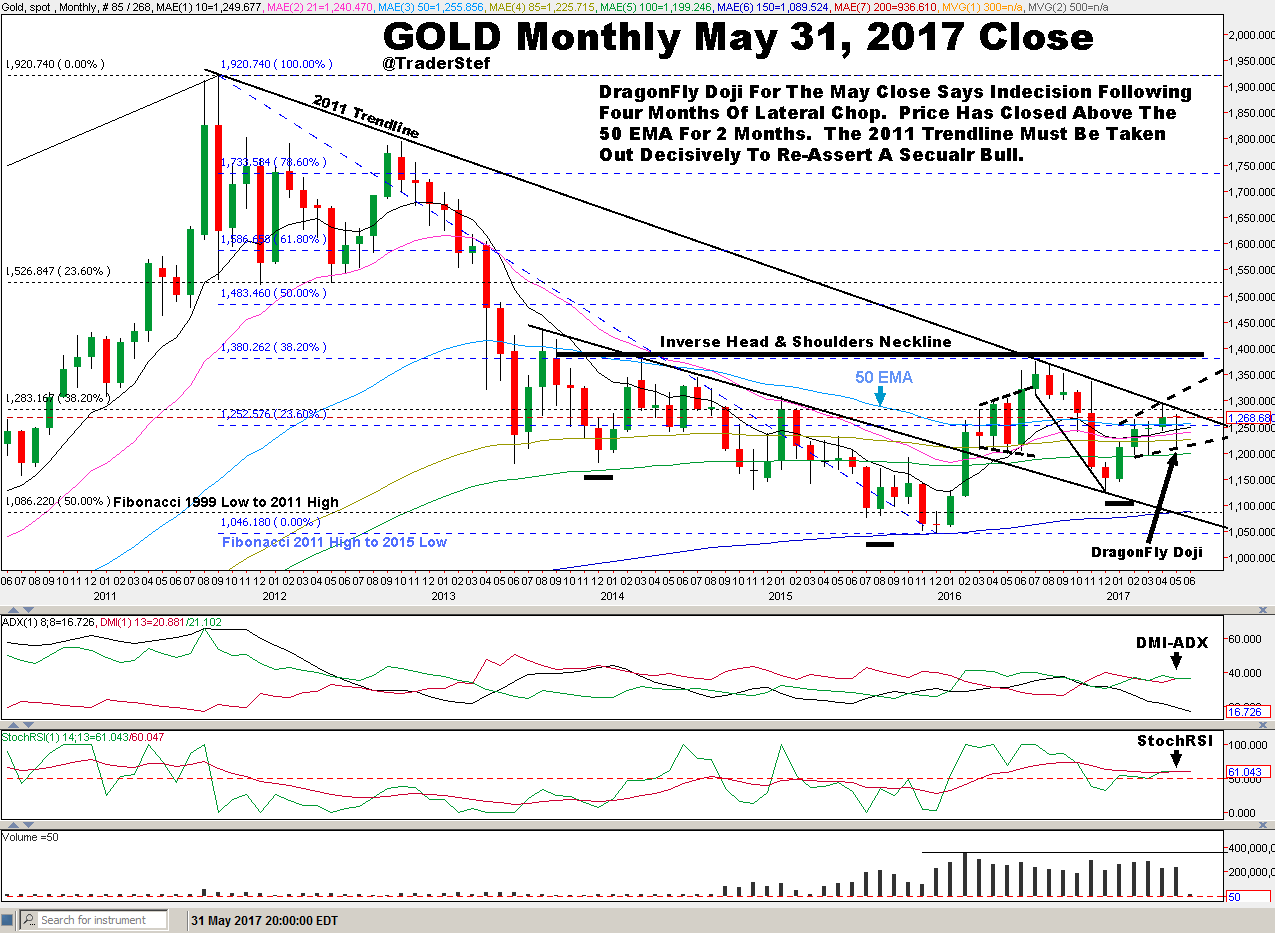 Just beyond all three of the aforementioned price levels, a stubborn Trendline drawn down from the 2011 High has been challenged several times.  The longer it takes to be conquered, the lower the price point becomes.  The current numbah is around $1280.  If it is decisively taken out in price and volume, odds greatly improve for an upward RYPO that would complete the Right Shoulder of a potential Inverse Head & Shoulders pattern set-up that goes back to September 2013.  Its Neckline is lateral to the 38.2% Fibonacci at $1380 drawn from the 2011 High to 2015 Low, creating a confluence of resistance before the next Fibonacci sitting at $1483.  Another pattern developed within the Right Shoulder following the January $74 spike… an Ascending Broadening Wedge whose topside Trendline is sitting in-between the 2011 Trendline & the Inverse H&S Neckline.  Allot going on!

Lastly, the candlestick print close for May 31 is a near perfect DragonFly Doji.  They can be Bullish in some circumstances, but here with the 4 months of lateral chop along the 50EMA, it’s 50/50.  So there you have it, flip a coin!  The DMI-ADX and StochRSI studies are undecided.  Volume is steady.

SILVER is still lagging behind Gold.  The chart looks terrible.  It hasn’t taken out the 2013 Trendline or the 50EMA, no GoldenCross on the Daily, and not even close to the numbah that must be taken out decisively to re-assert a Secular Bull…  $21.34-$21.49.  Hey, it could happen in one day, week or monthly RYPO, but not lately. 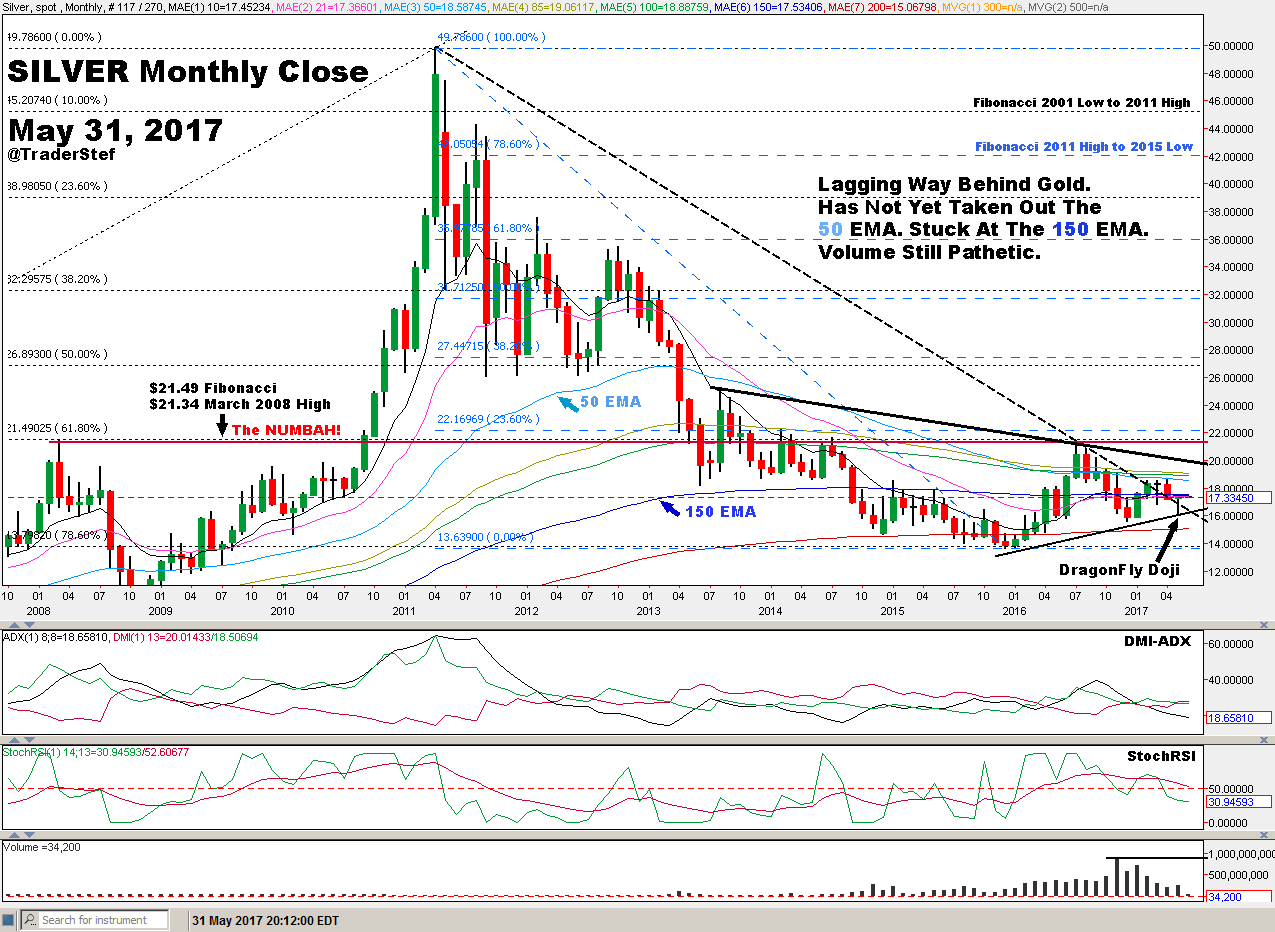